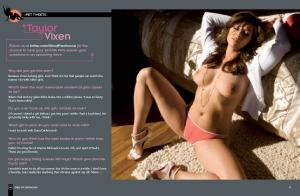 I met Taylor Vixen when she was in the running for Penthouse Pet of the Year way back in 2009. She came up to the Penthouse offices with Veronica Ricci and Ryan Keely, and I interviewed them for my old “Pet Projects” column. When she became Pet of the Year a few weeks later, she became one of my most-interviewed Pets. She was everywhere, doing everything, and it was my job to ask her about it. Not that I have any complaints about that. Taylor is one of the sweetest girls I’ve ever worked with. She’s so cute and funny, and we joked around a lot and goofed off and spent way more time on the phone than was necessary for my job. Once, when she was in New York, she came to the office to hang out, and we shared my desk for a few hours. This confused my coworkers, sure, but it also made them jealous. Who wouldn’t want this petite Pet sitting next to them while they worked?