I don’t really remember when I first heard about burn pits, though I know I started researching for this article at least a year before it was published, maybe even earlier. I keep a file on my desk of research for stories I want to write, if I ever have the time or opportunity, and when I went through it last fall, I found a printout of a short article about burn pits in Iraq and Afghanistan. Next thing I knew, my editor had approved my pitch and I was knee-deep in research.

I spent more time reading and researching than I had in quite a while. It took me several months to do all that background work and interview everyone, and there were numerous updates that needed to be worked in as time went on. I wanted to make sure I packed this 1,500-word article as full of information as I could, because it really is an important issue. All in all, I think I spent six months working on this article, longer than anything else I’d ever written. (Generally, from conception to completion, I’m done in a few weeks, with the biggest lag coming from the difficulty of scheduling interviews.)
When the article went to the Penthouse fact-checker, she came by to get a list of my sources and all my supporting documentation, and I think she nearly had a heart attack when I gave her the long, long list of articles and interviews she’d need to check. Oops! But I also got to impress her. Everyone in the Penthouse editorial department is pretty news savvy, and we all watch CNN and MSNBC and all that jazz even more than we watch porn. After checking a few quotes with me, the fact-checker wanted to know which of the quotes came from interviews I’d done myself and which I’d borrowed from other sources. I told her all the quotes were from my own interviews except one (which of course had proper attribution), and she asked if it was Paul Rieckhoff’s quote. “No,” I told her, “I interviewed him myself. Always do. He’s the best.” She was surprised I’d gotten someone who’s a regular on all the big news shows to speak to me, and I got to tell her that I’ve interviewed him numerous times. She was understandably impressed. (Hell, I’m impressed every time I realize I get to speak to him, too.)
For me, that’s one of the coolest things about this job: having access to people I admire and getting to discuss the issues with them. Rieckhoff (founder of IAVA) has always been a great interview, and he always takes a few minutes to discuss my other story ideas with me or give me some ideas that he thinks would work. He’s been super supportive from my very first article, and it’s such an incredible honor to get to pick his brain. But I also get to talk to amazing guys from the VFW, like Joe Davis and Ryan Gallucci, who are doing incredible work for our nation’s veterans. Then there are people like Dr. Steve Coughlin and Dr. Anthony Szema, both of whom I expected to shoot me down but who readily agreed to be interviewed. To have these incredible minds on the other end of the line is always astonishing to me, and I love having the chance to learn from them.
I’ve never been interested in meeting celebrities, and aside from a few guys in bands who I interviewed years ago, I haven’t really dealt with them. Don’t get me wrong, all the “celebrities” I’ve met have been perfectly nice, and some of them I really enjoyed talking to (Serj Tankian will always stand out as the biggest celebrity I’ve interviewed, as well as the most interesting), but I don’t get all that excited by the prospect of dealing with famous people. To me, they’re just people. But the idea of interviewing someone who’s doing something important, someone who I know is smart and dedicated, that’s daunting as hell. I get so excited and so nervous. I pull late-night cram sessions to study before the interview, and I dress up—even for phone interviews, lest they hear the disshevelment in my voice—to make sure I look and feel as professional as possible. I set up an iPad full of notes in case I forget something while we’re talking, and I give myself pep talks right before I dial their number, reminding myself that I’m smart enough to hold my own. It’s a little cuckoo-for-Cocoa-Puffs, but it works. And when I hang up the phone or walk out of the office, I always breathe the biggest sigh of relief, amazed that the person I was speaking to didn’t hang up on me or flee the interview as soon as I opened my mouth.
Anyway, you can read the results of some of my favorite interviews in this article about burn pits, “Rings of Fire,” from the October 2013 issue of Penthouse, by clicking right here. 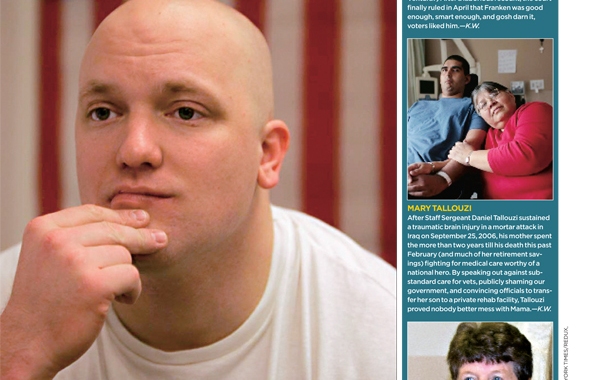 Penthouse just published a really great piece I wrote about Tricare, in which I quote Paul Rieckhoff. Of everything I’ve written over the years, the articles where I’ve quoted Paul are the ones I’m most proud of. Coincidence? Probably. But I’m beginning to think he’s my good-luck interview.

You can read the Tricare article in the May issue of Penthouse, now on stands, or wait until I share it here. Until then, however, check out this tidbit I wrote about Paul a few years back.

Every year Penthouse publishes its annual Badass List. The editors choose the most badass folks from various walks of life, from entertainment to activism, politics to porn. And by “badass,” what they really mean is “kick-ass.” These are the coolest, smartest, most incredible people they’ve come across in the past year. For the 2009 issue, I got to write about Paul Rieckhoff, the founder and executive director of Iraq and Afghanistan Veterans of America (IAVA). It was hard to get all of his awesome qualities into a hundred words, but it was definitely an interesting challenge. Plus, Paul is the biggest badass I know, so I was honored to be asked to write about him for the magazine.

Sometimes I write things that have nothing to do with porn or sex. Recently I wrote an article about Tricare and the Veterans Affairs health care system. That won’t be out for a while, but it reminded me of this article that ran in the March 2009 issue of Penthouse. It was supposed to be a short blurb, at most, but it grew into a two-page article that I think tells a pretty cool story about the everyday lives of our soldiers. It was such a great topic to immerse myself in for a few weeks, and it’s a piece I’m extremely proud to have in my clip book.

While researching and interviewing, I got to talk to a lot of really great people. Paul Rieckhoff of Iraq and Afghanistan Veterans of America was a wonderful resource and such an enjoyable interview. It’s always nice to interview people who are not only brilliant, but who you want to talk to after the interview is over. Paul is definitely both, and I’m thrilled every time we get to chat. (I’ve also read his book, Chasing Ghosts, more than a few times. It’s an amazing story and so well written. Everyone should check it out.)

Another guy I interviewed for the story was David Ratcliff, a soldier I found on MySpace. I messaged him through the site and got a phone call the next day. He didn’t believe I really worked at Penthouse, and he couldn’t understand why I would want to get in touch with him. Once I sent him my credentials, though, he was a really fun guy to talk to. He was smart and had good taste in music (key for the piece, obviously), and he gave me more than a few good quotes.

All the soldiers were great, and I can’t say enough about them. There were some I didn’t get to use in the article, and some who I didn’t expect to use but who ended up surprising me. One of the surprises was Joe DeRidder, who happens to be my cousin. Joe’s a really smart guy, and I love hanging out with him and talking to him when he’s home. But he’s not the most verbose person. I didn’t think he’d give me much material to work with. He surprised me, though, and had a lot to say. (My dad, who swears he’s “never heard the kid say more than three words at a time” thought maybe there was another Joe DeRidder. He was impressed.) The article made for a fun show-and-tell at our next family get-together.

One of the coolest things, though, was interviewing the musicians who were involved. Bryan from the Bouncing Souls was awesome, and the band’s publicist/manager was really cool. We didn’t get to do the interview in person, because the band was on tour, but Bryan’s emails were great, and he cracked me up when we discussed doing the interview via BlackBerry.

Serj Tankian was another great interview. His manager called me within five minutes of my sending an email requesting an interview, and said she’d already spoken to him and he was very interested in talking to me. I was blown away, and we set up a phoner for later that day. I don’t think I’ve ever set up an interview so quickly, even with my friends! I didn’t get to use his quotes in the story (they just didn’t fit with the tone of the article), but we chatted for 45 minutes, and he was super cool. He told me a great Sarah Palin joke, and then made my day (probably my entire year) by telling me that the story I was writing mattered, and he thought that I was a smart, savvy journalist, which, in his book, made me the cool one. I saved the recording and listen to it every now and then when I want to feel like a rock star.

I’ve been fortunate in that I only have to write the stories I want to write, and I work with people who are as excited about the topics I cover as I am. It means my clip book is full of great stories that double as really great memories.